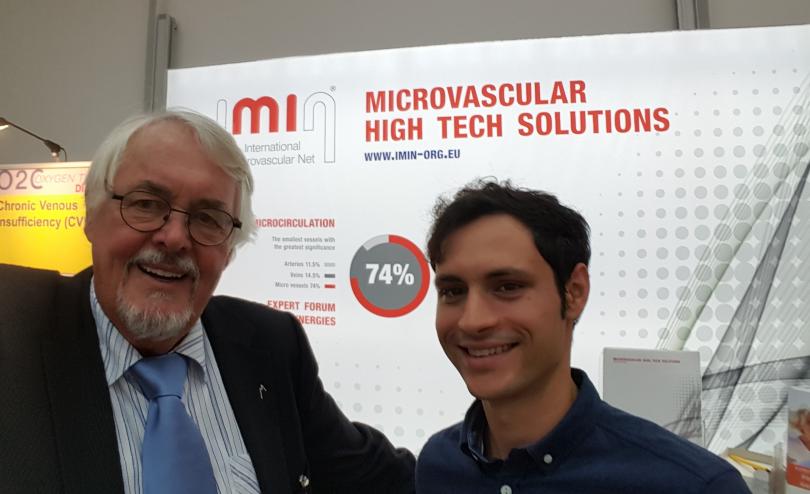 The interviewers (from left to right)

DGPMR abstracts from the University of Giessen Congress Autumn 2016

Dr. Monika Pirlet-Gottwald
Microcirculation disorder in the mesenchymal connective tissue as the cause of pain
The subject of this lecture is mesenchymal interstitial space and its meaning for the extravascular substrate transport and the humoral immune and nervous system. No organ system without mesenchymal tissue!
Collagen fibers, myosin filaments and fibrocytes give this area its structure, buffer systems intercept metabolic end products. Sympathetic and parasympathetic nerve fibers extend into this area, and there are also numerous immunologically active cells here: mast cells, B and T lymphocytes, which are responsible for the formation of immune mediators.
The mesenchymal cells respond to physiologically adequate stimuli with an acceleration of the metabolism and an adjustment to degradation and synthesis. The perfusion of organs is adjusted to the cellular needs through the endothelium-mediated regulation of muscle tone: the distribution of blood in the capillary network is controlled by rhythmic changes in the diameter of arterial and venular vascular sections (vasomotion).
Pathogenic stimuli, excessive strain, chronic muscle contractions, etc. cause an overload of the buffer systems, restrict the range of vascular regulations and subsequently lead to hypoxia and acidosis.
The result is inflammatory reactions, irritations of the nociceptors and pain. “Silent inflammations” are (partly) responsible for the chronicity of pain and also for many diseases of the intermediary metabolism. Poorly perfused tissue areas, such as fascia and ligaments (tendinopathies), are particularly affected.

Physical stimulation, such as used in physical vascular therapy, is an effective way to improve deficient vasomotion phenomena. The improvement of microcirculatory parameters is reflected in improved oxygen utilization and distribution of blood in the capillary network.
The effects are presented and performed using actual patient cases.

Prof. Dr. Fred Harms
Available data for influencing impaired microcirculation and prospects for health management
There is scientific consensus that supportive treatment with electromagnetic fields has a positive effect on blood circulation. In this context, the physiologically relevant cascade involving the formation of a calmodulin (CaM) complex plays a major role. This cascade is modulated by such treatment and, as we know, CaM-dependent cascades are involved in the cell repair processes. It is thought that treatments with electromagnetic fields can speed up the repair of injured and inflamed tissues and reduce pain and swelling much faster. In the meantime, science has been able to establish a direct correlation between BEMER physical vascular therapy and improved microcirculation. The clinical relevance of this therapy has also been demonstrated in numerous diseases such as diabetic foot, peripheral artery occlusive disease, multiple sclerosis-related fatigue and arthritis.
The challenge of chronic diseases: solution microcirculation
Microcirculation includes all transport phenomena in the exchange of substances and the humoral information between the “organ” blood and the parenchyma cells of the other organs, including the cellular and humoral immune response. All processes occur on the interstitial “transit routes for the exchange of substances” at a cellular level in arterioles, venules, capillaries and the initial lymphatic vessels. Based on these factors, microcirculation is the most important functional part of the circulation and its importance for our health is obvious.
Numerous diseases are caused by impairments to the microcirculation, or at least their progression is determined by it. Within microcirculation, the local regulation mechanism of spontaneous, autorhythmic vasomotion in the arterioles and venules in the vicinity of the capillaries, which quasi as pulsatile components influence the mixing phenomena between blood plasma and blood cells and, as a result, the distribution of the blood in the microvascular networks, is of crucial importance. One way to therapeutically influence impaired microcirculation is to restore a “normal”, spontaneous autorhythmic vasomotion frequency, as this is subject to clinically relevant impairment when an organism is under ongoing stress.
When you consider that impaired microcirculation has been identified as a cause of numerous vascular diseases, and the progress of many widespread diseases (type 2 diabetes, cardiovascular diseases, back pain, etc.) is exacerbated by impaired microcirculation, the medical and economic importance becomes clear.

Dr. Pawelke
"Systemic endothelial/lymphatic therapy" by means of systemically active “BEMER physical vascular therapy”
The endothelium is a single layer of cells which lines the interior wall of all vessels (arteries, capillaries, lymph vessels, veins).
The endothelium operates as a biological network system (biological sensor and signaler) in reaction to all internal and external influences and is, amongst other things, responsible for providing energy.